Hanoi, the ancient Vietnamese capital and French-colonial city, is known for its cuisine, nightlife, silks and handicrafts. It's a great place to explore on foot, as long as you figure out how to navigate the streets that are surging with scooters. It's not quite as mental as Ho Chi Minh City, but close.

Below is my compilation of what you should do and see, as well as some recommendations for where to indulge in food and beverage, if you find yourself in Hanoi.

*HANOI OLD QUARTER - In this quarter each street used to specialize in one specific type of manufacturing or commerce. Street names were derived from the crafts of each area. Today, most of the crafts have been replaced by attractions, food, tourist services and entertainment.

*HANG GAI STREET - Also known as Silk Street, this is one of the streets in the Old Quarter where original craft products still exist. Here you can find high quality, inexpensive silk products. They make great gifts that don't take up too much room in your suitcase. You can also get clothes tailor-made here.

*HOAN KIEM LAKE - In the middle of Hanoi's Old Quarter you'll find a lake. Leisurely circle its perimeter, alongside tourists and locals alike. Or simply sit on a bench and observe the Hanoian pace of life.

*TRAIN STREET - High-speed locomotives barrel through this residential area, colloquially known as 'Train Street', at various times of the day. The schedule seems to be more of a suggestion/estimation than fixed. Even the sign (below) is made using adjustable tape, rather than permanent text.

The government is doing its best to shut down many of its Instagram-famous Train Street cafes, because they have become overrun with selfie-taking tourists. But, some of them are still in operation (like Xóm Tàu Cafe).

We arrived at Train Street just before 2:30pm, and had just enough time for a beer before the sidewalks were cleared and everyone was instructed to stand pressed up against the buildings. 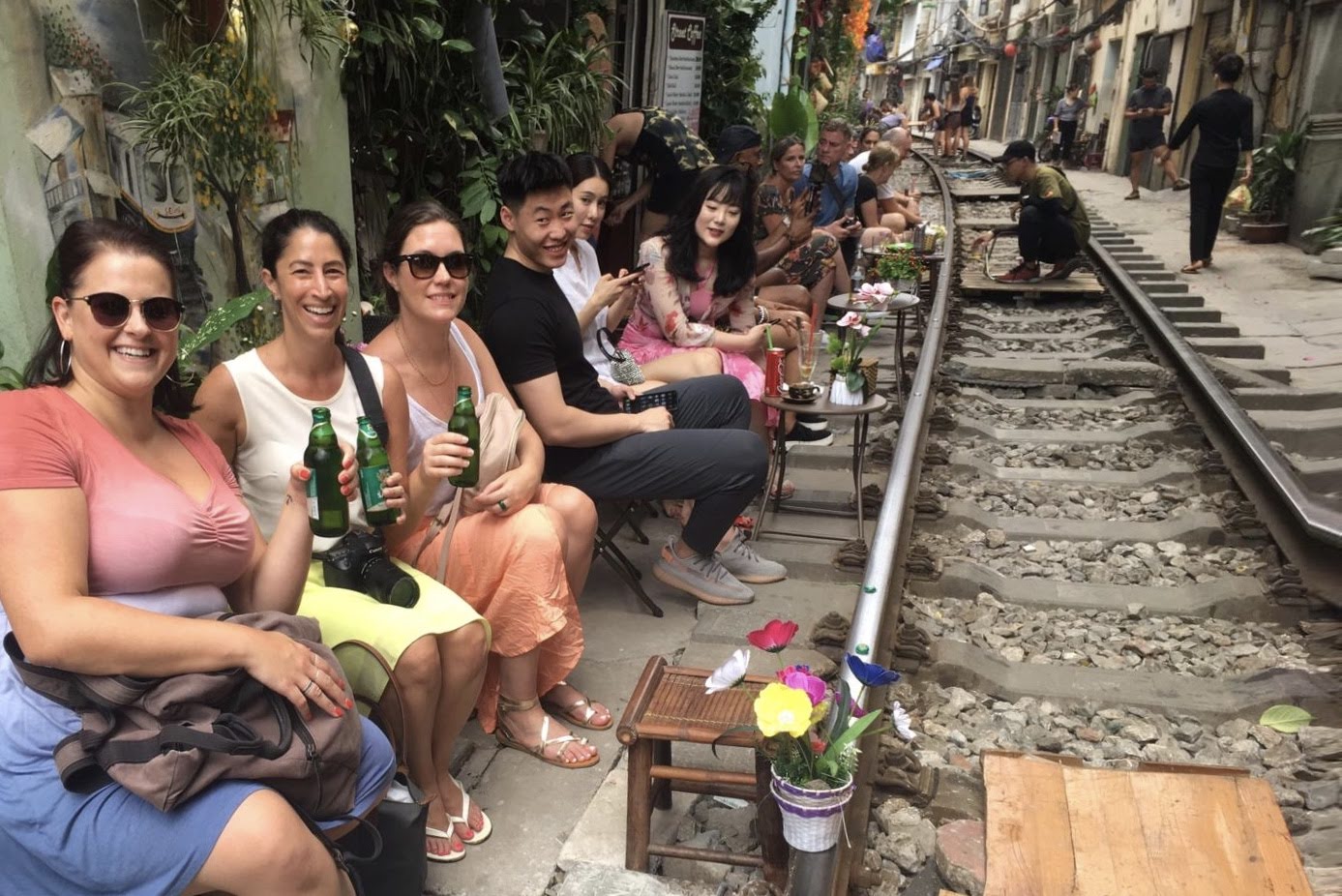 And then the train came, tooting its horn and flying by just inches away.

After the train passed, the tiny chairs and tables were set up again, in a flash, and normal life resumed as if nothing had happened.

Our cafe employees had put our bottle caps on the tracks, before the train came along, and then gave us the flattened caps as a keepsake.

*HALONG BAY/BAI TU LONG BAY - Dotted with jagged limestone islands, surrounded by emerald sea, Halong Bay is one of Vietnam's biggest attractions (and also a World Heritage Site). About ten million people visit each year. Sadly, as a result, it's become littered, polluted and overpopulated. In an effort to curb some of the litter and pollution, strict single-use plastic regulations have been put in place by the government. But the overcrowding has not been addressed.

We selected a Swan Cruise two-night/three-day option, which we found to be the right amount of time to relax and soak up the beauty of the atmosphere. There were 16 cabins on-board. We correctly anticipated that the rooms would be small/not have a great amount of storage, so we left most of our luggage with the hotel back in Hanoi and just took what we absolutely needed. Transportation (about four-hours) was included, between Hanoi and the cruise ship, in the price. There was no WiFi on the ship and service was spotty. All meals were included (and were abundant and delicious), but booze incurred additional costs. When I went, in October, it was mostly blue skies (one foggy day), moderate temperatures, calm seas and no bugs.

Most of the first day was spent in transit. Once we finally arrived, we had an opportunity to kayak and swim a bit, before returning to the boat for sunset.

Day two was spent kayaking some more, exploring caves and going on a rowing boat tour of Vung Vieng fishing village, where we also learned how pearls are grown.

On the last day, I got up early to watch the sunrise (~5:20am at the time of year when I visited). I was alone and content in my solitude. It was so peaceful and beautiful. After breakfast, we visited a cave and a pretty beach and then had a cooking demonstration and lunch before being transported back to Hanoi.

*CAPTAIN SKYBAR - Go to this rooftop for a fun vibe, snacks, drinks and live music!

*LUC THUY RESTAURANT AND LOUNGE - We stopped here on our walk around Lake Hoan Kiem. The view of the lake from the restaurant terrace is great and it's a nice spot to rest your feet and have a drink/bite.

*PHO MAU - This little gem, in the Old Quarter, has truly amazing pho and spring rolls.

*GREEN TANGERINE - Sadly, I had to give this dinner a miss, because I was suffering from an unwell tummy, but I am told that it's great.

*POLITE & CO - This cozy and dark speakeasy has a 1920's gentleman's club vibe. It feels like the sort of place you'd bring your mistress, to indulge in craft cocktails and whisky.

*PIZZA 4P'S - If it's the last night of your 16-day trip and you're just a tad sick of Asian food, head to this Italian option for delicious pizza and pasta. Be sure to make a reservation in advance.

Known Before You Go: